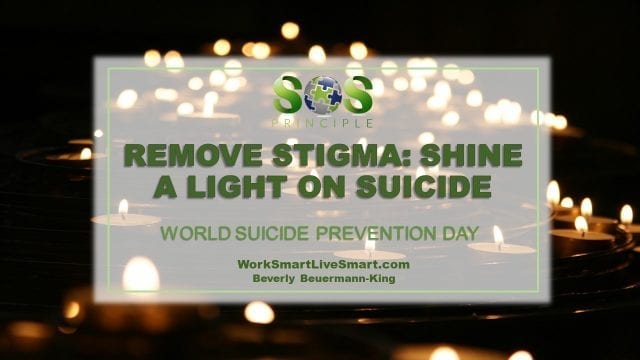 “A permanent solution to a temporary state.”

We often don’t hear about the suicide attempts or completions of those around us. They are masked because of guilt and shame or for fear of it being ‘contagious’. Because we don’t talk about it, those around us can suffer in silence, unaware of the supports that may be available to them. There is little funding because there is no public outcry. We distance ourselves by thinking of these people as crazy or weak. But the issue of suicide touches us all – whether directly or indirectly.

What Does World Suicide Day Have To Do With You?

World Suicide Prevention Day is held on September 10th each year and is co-sponsored by the World Health Organization (WHO). The purpose WSPD is to improve education, disseminate information, decrease stigmatization and, most importantly, raise awareness that suicide can be preventable.

Anyone can show their support of suicide prevention and awareness, or for the survivors, and/or for the memory of loved ones lost. It is called “Light a Candle on WSPD” and it happens at 8 PM.

Get to know the resources that are available to help and that you can connect with, if you suspect that someone is at risk for suicide. Beverly Beuermann-King Click to tweet

Some Quick Facts About Suicide:

Suicide: Support Those In Need