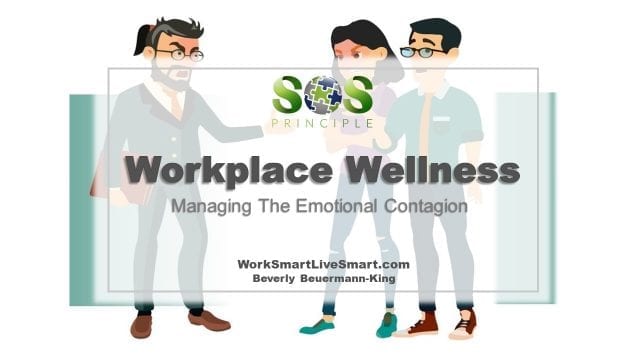 Dealing with Difficult People At Work: The Emotional Contagion

Research shows that employee and leader temperaments are highly contagious. Dealing with difficult people at work can really help stem the negative consequences on productivity that come from toxic emotions.

Employees are not emotional islands. Rather, they continuously spread their own moods and receive and are influenced by others’ moods. When your employees work in groups, they literally can catch each others’ emotions like viruses, a phenomenon known as emotional contagion.

Emotional contagion is a three-step process through which one person’s feelings transfer to another person.

Mimicry is not all bad; a person can also adopt a friend or colleague’s good mood, which can help enhance their bond. However, negative moods are difficult to overcome.

A team may develop a “group mood” that reflects the mood of its manager. An University of New Hampshire study showed that the leader’s moods permeated the group’s and that “negative” moods trumped the positive ones.  Employees take notice of their leader’s emotions, and therefore, leaders strongly influence the mood, attitudes, and performance of their team.

Research has also shown that:

Difficult People and Emotional Contagion: What Does This Mean For You As A Leader?

Leaders have a responsibility to ensure that the culture that their team works in, promotes health and productivity. Beverly Beuermann-King Click to tweet

Leaders need to take note of the mood of their team and their own mood, to ensure that it is a positive influence on team dynamics and productivity.

Here are a few tips for leaders on managing moods at work:

Emotions are contagious. As a successful leader, finding ways to foster positive emotions and deterring and deflecting negative emotions, can bring about engaged, successful and healthy teams.

Contact Beverly about hosting a workshop for your team in dealing with difficult people. Learn to nail down strategies to encourage a positive and safe working environment!

Management Practices That Can Lead To A Toxic Workplace

Support In The Workplace