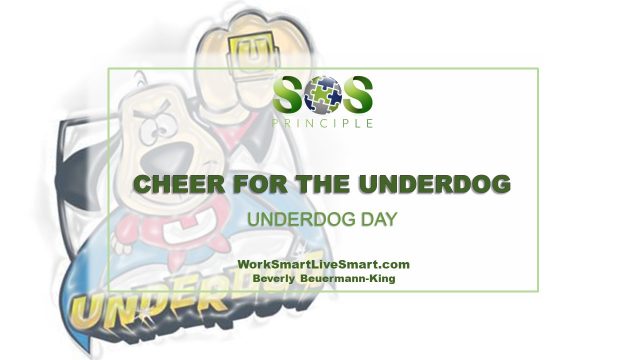 Life Of The UnderDog

Do you hate it when the interviewer goes after the second place person and asks them how it feels to lose the race?  Always cheer for the underdog, the team not expected to win?  Are your favourite movies the one where the underdog prevails?

Today is the day to salute all of the underdogs and unsung heroes.

Sometimes we win and sometimes, no matter how hard we prepare or try, it just doesn’t work out. Beverly Beuermann-King Click to tweet

The underdog is a person or group who is expected to lose.

However, sometimes they pull off the unexpected.

Isn’t that what life is like for most of us?

It’s All About Improvement

When my son was just starting out in hockey, they use to rotate the goalies.  His team was badly beat by one particular team.  On the next re-match, my son was to be the goalie.  He donned his gear and was determined to stop the pucks that came his way.

In the end, they lost by 10 goals.  I was fully prepared to go into the dressing room and provide my motherly comforting and ‘you’ll get them next time’ speech.  To my great surprise, my son’s first comment, was “Well at least we didn’t lose by 15 like the last time”.

Improvement is improvement and who knows what the outcome will be the next time….good lesson for all of us.

Popular Underdogs who went on to win major upsets:

The original meaning of the word “underdog” originated from sawsmen who built ships. Planks of wood called “dogs” were placed over the top of a pit, and two men would have to supervise the placing of these planks. One man would stand on top of the planks, and one man would stand underneath the planks in the dark pit, where he would be covered in sawdust. This poor man was known as the underdog.

Contact Beverly about hosting a mental health workshop for your teams on how to prevent burnout in the workplace. Discover tips to deal with stress, build social connectedness and focus on the importance of workplace relationships!

May Your Dreams Come True Day

National Be On Purpose Month