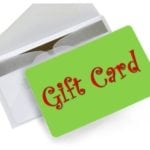 Gift cards are currently the most popular incentive offered by employers, with their usage increasing 65 percent between 2007 and 2008.

Research conducted by Watson Wyatt shows the following use of incentives:

Question:
Do you use incentives in your wellness programs?