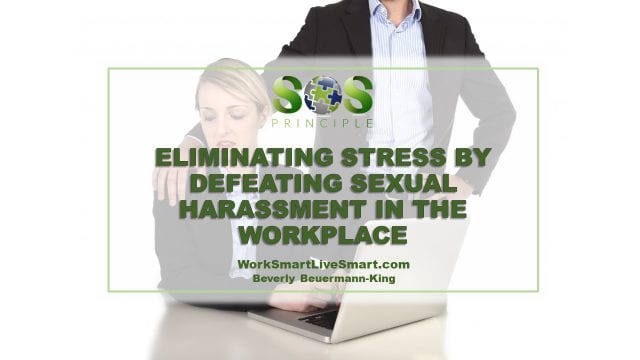 How Would You Deal With Sexual Harassment

Dealing with sexual harassment can be very difficult and unfortunately more than a third of working Canadians have experienced it or been effected by it. It can trigger a variety of stress-related illnesses, relationship difficulties and upset productivity and engagement.

Educating around sexual harassment and developing strong policies and procedures to deter it are the most effective means of minimizing its occurrence and impact.

What Is Sexual Harassment

Sexual harassment is defined as unwelcome or unwanted conduct of a sexual nature, whether it is verbal, visual or physical, that creates an intimidating or detrimental work environment, or leads to job-related consequences.

Sexual Harassment In The Workplace

Companies and supervisors may both be held equally liable for acts of harassment committed by their workers, even if unknown by management. However, an act of harassment shall not be considered to be an act committed by an employer if it is established that the employer exercised all due diligence to prevent this act and to mitigate or avoid its consequences. These preventive measures, include a comprehensive policy and thorough training sessions for all management and employees.

The Canadian Human Rights Commission reported that 49% of women and 33% of men experience unwanted sexual attention. Men and women at the bottom of the economic scale are more likely to experience gross overt forms of sexual harassment and professionals and managers tend to receive more subtle treatment.

How Some Victims May Feel

Individuals are encouraged to follow what is labelled a Proactive Personal Response as it has been found that ignoring or avoiding the behaviour does not clearly establish the fact that the conduct is unwelcome or unwanted.

Confronting the offender and the offensive behaviour establishes personal boundaries defining what is unwelcome and unwanted. Immediately upon being the recipient of objectionable behaviour, it is strongly recommended that the individual make it known to the offender that the behaviour made her/him uncomfortable. This can be done either verbally or in writing. A direct response with a brief and clear message is the best deterrent. Humour should not be used as it can too easily be misunderstood. If the offended individual is not able to confront the offender they should put it in writing and send it to the offender. Such proactive responses will deter further acts of sexual harassment.

The offended individual should maintain documentation of all such activities. A copy of the letter should be made and kept off business premises.

If the harassment continues after the offender has been confronted verbally or in writing, the behaviour along with the evidence must be brought to the immediate supervisor and/or designated officer as named in your Sexual Harassment Policy.

3. If it continues, let supervisor or Designated Officer know

It Can Be Hard…

Dealing with sexual harassment can be very difficult and it can negatively impact both the individual and the overall corporate environment. However, companies can protect themselves by implementing a comprehensive policy and providing training to employees and leaders on that policy. Individuals are then encouraged to follow a Proactive Personal Response as it has been found to be 90% effective in deterring most acts of sexual harassment and in cases where it does not stop the harassment, the individual is able to effectively address the issues through the policy itself.

SEXUAL HARASSMENT IS NOT:

International Day for the Elimination of Violence Against Women

Eliminating Stress By Defeating Sexual Harassment In The Workplace