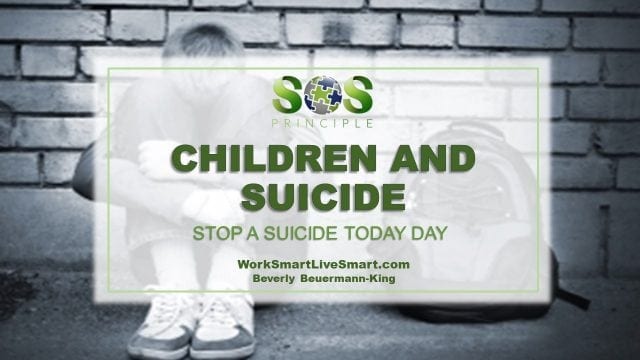 When it comes to the issues around Children and Suicide, we know that their death brings a whole different level of grief, pain, and anguish to those who cared about that child. In fact, 3% of our children are suicidal at any given time and our rates are increasing among our youth. Suicide is the 10th leading cause of death for elementary school-aged kids in the U.S. Children and suicide is the second leading cause of death among our children ages 15-19 and studies show that 1 in 7 students has seriously considered suicide. These statistics are alarming and so against our innate beliefs that children can not be as hopeless as it was often seen to be required to consider suicide.

Children and Suicide: Breaking It Down

The reality is, that at a surprisingly young age, children have a pretty good grasp of the concept of death and suicide. For our youngest group issues around ADHD and ADD can increase risks as does relationship issues within the family. As children become adolescents, depression becomes a serious risk factor as does relationship issues with friends and significant others.

Parents must be able to determine the child’s risk for immediate suicide. This involves becoming aware of the behavioural and verbal clues and then communicating around the information that you have observed. Assess the child’s suicide plan – how specific is it, how lethal is it, how available is it. The more detailed and available the plan, the higher the risk for immediate suicide. Asking kids about suicide is safe and does not put ideas into their heads which is often a fear felt by parents.

Beyond The Baby Blues