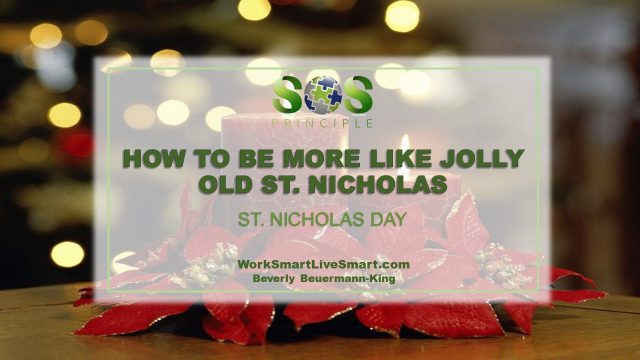 Ever wondered who St. Nicholas was?

There once was a young boy named Nicholas, who was born during the third century. His wealthy parents, who raised him to be a devout Christian, died in an epidemic. Obeying Jesus’ words to “sell what you own and give the money to the poor” Nicholas used his whole inheritance to assist the needy, the sick, and the suffering. He dedicated his life to serving God and was made Bishop of Myra while still a young man. Bishop Nicholas became known throughout the land for his generosity to the those in need.

One story of St. Nicholas tells of a poor man with three daughters. This poor man’s daughters, who had no dowry, were destined to be sold into slavery. Mysteriously, on three different occasions, a bag of gold appeared in their home-providing the needed dowries. The bags of gold, tossed through an open window, are said to have landed in stockings or shoes left before the fire to dry. This led to the custom of children hanging stockings or putting out shoes, eagerly awaiting gifts from Saint Nicholas.

Sometimes the story is told with gold balls instead of bags of gold. That is why three gold balls, sometimes represented as oranges, are one of the symbols for St. Nicholas.

In 1998, my youngest son was due to arrive on Christmas Day.  We decided that boy or girl, their name would honour St. Nicholas as he was our blessed gift.  Nickolas arrived safely on December 22.

Gifts are all around us, but it is up to us to recognize them in our lives. Beverly Beuermann-King Click to tweet

Contact Beverly about hosting a mental health workshop for your teams on how to deal with holiday stress and the holiday blues. Discover tips to deal with stress and how to build resilience!

The Great Warm Up

What Will Your Legacy Be

Tisn’t The Season To Be Stressed Out

Holiday Stress: Enjoy and Be Merry