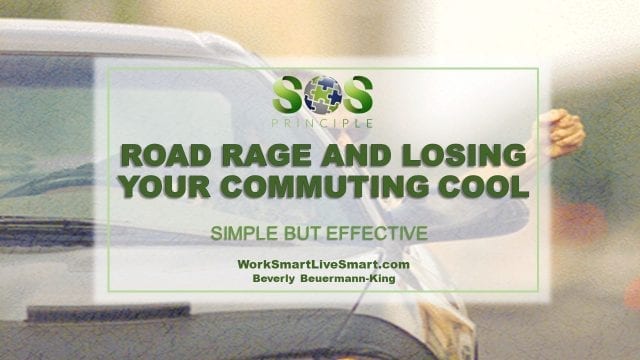 Have you ever had a bad day and then while driving home some “jerk” makes you even more angry?  Or have you ever been embarrassed that your children have witnessed you lose your cool while driving?

Almost everyone has experienced a road rage situation and we can find hundreds of news articles on incidents of road rage. Even comedian, Robin Williams reported that he suffered from intense road rage and once yelled so loudly that his embarrassed son begged him to put the window up. The only difference between you and a road ‘rager’ is how you deal with the feelings that occur while driving.

A study by Clark, reported that the average commute by Canadians was over an hour. Commuting can be a stressful activity, producing several signs of stress even when the person does not report feeling particularly stressed out.

Stress can arise from

This stress can lead to us being frustrated, angry and doing something that we may regret…even in front of our children.

What Is Road Rage?

The phrase “road rage” entered the English language around 1994 in London and the Oxford English Dictionary first started listing “road rage” in 1997. It defined road rage as “a violent anger caused by the stress and frustration of driving in heavy traffic.”

To protect yourself and especially your children, you have to get control of your emotions. The worst thing would be to meet someone who is as angry as you, or possibly even more possessed by rage, that could cause a confrontation on the road that may lead to an exchange of gestures, dangerous driving tactics, physical violence or put your life or your children’s lives at risk.

It is choice that we need to exercise. When we are frustrated in heavy traffic we have a choice of how we’re going to respond.

The types of road rage responses include:

There are four degrees of escalating road rage retaliation:

Remember to answer honestly. Have you ever:

It is choice that we need to exercise. When we are frustrated in heavy traffic we have a choice of how we’re going to respond. Beverly Beuermann-King Click to tweet

How To Control Road Rage

Christer Gustafsson, Senior Safety Engineer at Volvo’s head office in Gothenburg, Sweden stated “there comes a point when drivers must take personal responsibility for their actions. In the end, how we control our anger is the best offense/defence against this growing problem.”

1. Allow adequate time to get to your destination. Better to arrive early and safe. Do not obsess about the time

2. Avoid blaming – “This traffic is impossibly slow. What’s wrong with these jerks, they’re driving like idiots.”

3. Have a plan for gridlock – jot down some notes, practise a speech, listen to your favourite music, use a portable tape cassette to dictate letters and messages

4. Learn – if you commute at least one hour per day, you are spending the equivalent of 30 class days per year in transit. Inspirational speakers and learning resources are available on tape to help you take advantage of this ‘free’ time

5. Learn to breathe deeply and often

7. Stop and nap if you start to feel tired to avoid dangerous driving and accidents

8. Proper posture can combat fatigue so adjust your seat accordingly

10. Enjoy the humour and beauty around you

11. Do not take it personally – if so you may be ‘killing’ the wrong person’ – you are only harming yourself

12. Realize that anger is something that we choose – Avoid the “they make me so mad when they do that” syndrome

13. Avoid thinking only about oneself – “They better stay out of my way. I’m in no mood for putting up with them. Out of my way folks.”

14. Act generously and be forgiving – Remember people do make mistakes

15. Do not be competitive – “Darn, that guy made the light and I didn’t”, “How come that lane is faster than this one”

17. If you are in the left lane and someone wants to pass, move over and let the other driver by

19. Do not make eye contact with an angry driver

20. Do not make inappropriate hand or facial gestures

21. Use your horn sparingly

22. Remain in your vehicle if a situation arises

23. If you are harassed by another driver and are being followed, do not go home. Go to the nearest police detachment

24. Let aggressive drivers stay ahead of you

25. The California Department of Motor Vehicles drafted a document on how best to avoid road rage and noted some less-common behaviours that should be noted like not driving slowly in the fast lane, making sure your signals are off after a turn is completed, making sure you are up to highway speed before merging and following parking lot etiquette

Things To Keep In Mind Around Road Rage

Remember that you cannot control the drivers around you, but you can control the way they affect your well-being. Be calm and drive safely. By preparing for your commute, keeping your expectations on-track and by not personalizing situations that happen around you, you will be able to arrive at your destination relaxed and prepared to focus on your next task and you will set a great example for your child on how to deal with all kinds of stressful situations.

Workplace Wellness: Commuter Benefits Can Be Adding To Your Green Program