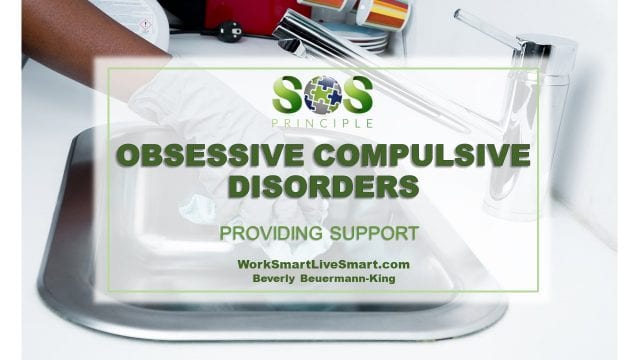 “So what do I do when she comes back from break and has to clean her whole desk and equipment before she starts work again?”

Many of us do things that are quirky.  We check the lights, the iron, or the locks before we get on with our day.  Some of us repeatedly check these things and some of us get so caught in the process that we are unable to get to work.

What is Obsessive Compulsive Disorder?

Obsessive-Compulsive Disorder is characterized by recurrent obsessions and/or compulsions that are severe enough to be time consuming or cause marked distress or significant impairment.  Obsessive-Compulsive Disorder is made up of two parts; obsessions and compulsions.  Obsessions are persistent, disturbing, intrusive thoughts, ideas, images or impulses which cause marked anxiety.  You may be able to relate to this.  It is similar to the anxiety that you may feel thinking that you left the stove on high that morning before you left for work.  Compulsions are repetitive behaviors or mental acts that are done to prevent or reduce this anxiety or distress that is experienced.

For most of us, our quirky behaviours do not interfere with our ability to maintain a job or look after ourselves or our families.  But for about 1.5% of the population, these obsessions and compulsions are so severe that the person is unable to lead a productive, healthy life.

Most individuals with Obsessive Compulsive Disorders fall into five categories:

These may seem rather mild, but when put into context you can see how OCD can be so debilitating.  Not just washing your hands 9 or 10/day, but 100 times a day, and to the point where you are removing the skin from your hands and making yourself more susceptible to the germs and infections that you are trying to avoid.

The A&E show, Hoarders, documented the struggles of people who could not part with their belongings and the roads they took to recovery.  It was not just about collecting.  It showed the incredible anxiety that these people faced and how the possessions helped to sooth those anxieties.  Their health and their life was at stake.

This is one of the saddest of all the mental illnesses as it usually begins in childhood to early adulthood.  It impacts our young children. The average age of onset  for males is 6 – 15 years old, while with females, it is 20 – 29 years old.

OCD is not about choice or intelligence.  It is about incredible anxiety that overtakes a person’s life and the behaviours that they do, to try and deal with that anxiety. Beverly Beuermann-King Click to tweet

As leaders who may deal with someone with OCD, remember that:

In the case above, the desk cleaning wasn’t interfering with her job.  However, if it had, the leader would be best advised to find useful strategies that would enable the employee to get her area cleaned and not let it bleed into her job duties.

Guidelines when working with someone with OCD:

Signals to watch for include, but are not limited to:

People with OCD usually report that their symptoms get worse the more they are criticized or blamed, because these emotions generate more anxiety.

(2)    Modify expectations.  People with OCD consistently report that change of any kind, even positive change, can be experienced as stressful. It is often during these times that OC symptoms tend to flare up.   You can help to moderate stress by modifying your expectations and by using validating, supportive, and encouraging statements.

(4)    Recognize “small” improvements.  People with OCD often comment that no one understands what it takes to accomplish something such as cutting down the number of times they wash their hands or clean their desk.   While these gains may seem insignificant, it is a very big step.  Acknowledgment of these seemingly small accomplishments is a powerful tool that encourages them to keep trying.

(5)    Support taking medication as prescribed and understand that all medications have side effects that range in severity.  Show empathy around their mediation challenges.

(8)    Consider using a contract if the OCD is impacting the person’s ability to do their job.  These may include accommodations for when the anxiety becomes overwhelming.

Support Can Make All The Difference

Canada became the first country in the world to release a national standard for mental health in the workplace. The standard is voluntary, but it is designed to help organizations and their employees improve their workplace psychological health and safety.    One of the ways to do this is to be a supportive leader and make it possible for people with mental illnesses to be as  productive as they can be in our workplaces.  We know that mental illness has an impact on the organization, the rest of the workforce, as well as the individual.   To promote understanding and reduce the stigma around illnesses such as OCD, organizations can sponsor workshops on stress management and specific mental illnesses, bring in a peer-support speaker to talk about their OCD experiences,  facilitate the formation of work-based support groups or invest in mental health-specific programs such as mental health first aid training for front-line supervisors.   Mental illness makes it difficult for those experiencing them to be successful and productive, but not impossible.  By taking some of the steps we described, we make it easier for us all to be engaged, successful and healthy.

Employee Health and Barriers To Wellness

Do You Know Your Stress Numbers

Posttraumatic Stress In An Age Of Uncertainty

Children and Suicide: Myths and Facts