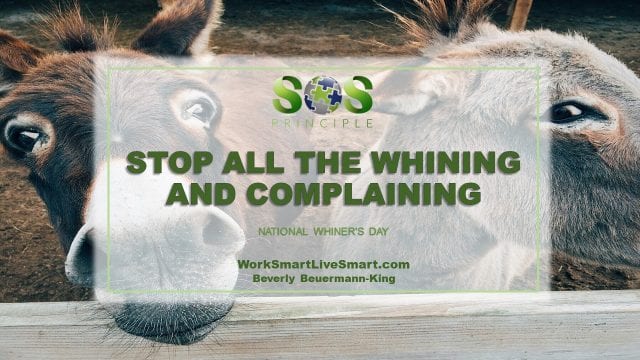 As this is my last posting for 2020, I thought I would pay tribute to whining.

We can be a nation of entitled whiners.  “It’s too cold.”  “I am the only one around here who does anything.”  “I didn’t get what I wanted for Christmas.”  “The government is doing it to us again.” “Blah, blah, blah” or should I say “whine, whine, whine.”

You open the newspaper, you watch the news, you logon to your social networking accounts and you are bombarded by those around you who are whining and complaining.

When we notice our children whining, we are told to call their attention to it. Whining can become an unconscious habit, so we need to call them on it and let them know that they need to respond in a different way ie.  “Try again in your normal voice and I’ll pay attention.”

But what do you do when it is a co-worker or another adult who is whining and complaining?

Hunger, tiredness, boredom and feeling unwell are factors that can precipitate whining sessions, but some have learned from a very early age that whining gets them the attention that they are seeking.  Whining has become second nature and their predominant way of communicating.  Their behaviour is draining on relationships and it can poison a workplace.

If we catch yourselves whining and complaining:

If you are going to confront a whiner:

Finally, minimize the amount of time that you spend with the whiner.  They will zap your energy if you aren’t careful.

Contact Beverly about hosting a workshop for your teams on dealing with negative attitudes and difficult people. Learn strategies to encourage an engaging, and positive working environment!

What You Think Grows Upon You