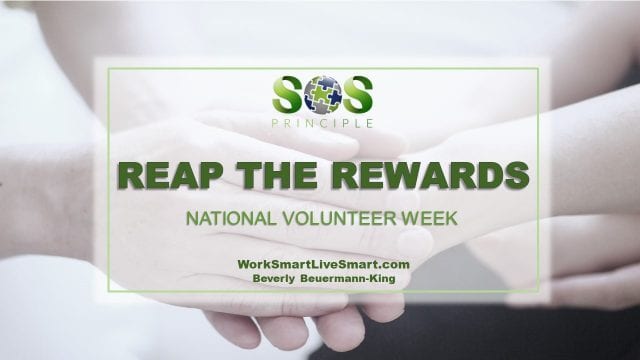 Why Do People Volunteer?

The motivation cited most commonly (by 95% of volunteers) was a belief in the cause supported by the organization for which respondents volunteered. The majority of volunteers also said that they volunteered because they wanted to use their skills and experiences (81%), were personally affected, or knew someone who was personally affected, by the cause the organization supports (69%), or wanted to explore their own strengths (57%). Somewhat fewer volunteers got involved because their friends volunteered (30%), in order to fulfill religious obligations or beliefs (26%), or to improve their job opportunities (23%). A small percentage (8%) were required to volunteer by their school or employer, or as part of the terms of a community service order.

Volunteering is a way of connecting yourself to the larger society and connection is critical when it comes to dealing with the sources of stress that we face. Beverly Beuermann-King Click to tweet

The most commonly cited early life experience that was a predictor of volunteering was participation in an organized team sport (66% of respondents), followed by seeing a role model help others in some way (53%). About half of respondents said that they had been helped in the past by others (50%), had been members of a youth group (49%), or had participated in door-to-door canvassing to raise money (48%). Relatively fewer respondents said that they had been active in a religious group (28%), or in student government (18%).

By far the most commonly cited barriers were those related to time.

More than two thirds (69%) of non-volunteers said that they lacked the extra time to volunteer and nearly one half (46%) said that they were unwilling to make a year-round commitment. Other significant barriers:

Volunteering is a way of connecting yourself to the larger society and connection is critical when it comes to dealing with the sources of stress that we face. If you are a volunteer, talk about your experiences to others. Positive role models are needed, especially by our younger generations. If you are looking for volunteers for your organization, be clear about the expectations, make commitments short and ASK. Many have difficulty holding up their hand to volunteer, but would say yes if asked in person.

The most rewarding experiences that I have had have come from volunteering. Especially my time developing youth groups, being on boards for various charities and fundraising for my children’s sport programs.

What Will Be Your Legacy Month