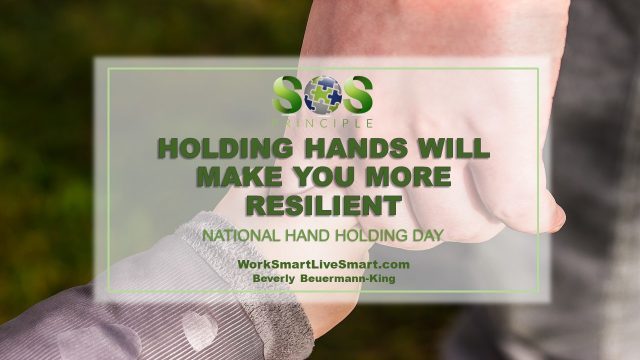 How Do You Hold Hands?

Everybody has their preferred technique: some like interlocking, others prefer cupping.   Some like the pinky-link while others prefer being on top…others on the bottom.   Some swing both ways.

When you hold the hands of another you are sending the message that the other person is valued, important and noticed.

James Coan of the University of Virginia found that when people hold hands, their brains don’t work as hard to cope with stress.  When we hold hands, (or hug and touch), our bodies release oxytocin.  Its role is to calm and destress, and it is thought that touch triggers the body into producing this hormone.

Touch stimulates the production of oxytocin which, in turn, promotes a desire to touch and be touched. In another study, researchers from the University of North Carolina told couples they would have to give speeches. Before they did so, 100 of the couples sat holding hands for a short time, then they embraced for 20 seconds. Another group of couples rested quietly and were separated from their partners. During their speeches, heart rates and blood pressure rose twice as high in the second group compared to the hand-holders. Research further suggests that oxytocin is the chemical that can give marriage its beneficial effect on health and resilience over those that are single.

To hold someone’s hand is to offer them affection, protection or comfort. Beverly Beuermann-King Click to tweet

A poll of 3,000 people by Abbeyfield in the UK showed that more than half of people couldn’t remember the last time they held their grandparents hand and more than a quarter had never done so. However, almost a fifth of respondents, when asked whose hands they would most like to hold, said it would be the hand of a grandparent who has died.

The poll also revealed that the older you get, the more you regretted that lack of contact. Almost half (48 percent) of respondents over 55, when asked whose hand they would most like to hold, said it would be that of a departed parent.

What Do You Associate Hand Holding With?

The majority of respondents (80 percent) associated holding hands with romance but this contact was most popular amongst the young. Of those surveyed aged 17 and under, 64 percent most wanted to hold hands with someone they were attracted to. This figure decreased with age until only 21 percent of those over 55 wanted to hold hands for romance. This older group were most likely to associate holding hands with dying. (15 percent compared to less than two percent of those surveyed aged 17 and under)

Loneliness and depression are rampant in today’s society.  Holding someone’s hand, especially of someone who is isolated, dealing with an illness or elderly can help them to be more resilient against the impact of stress, promote better health and combat their feelings of isolation.

Robert Fulgham (Everything I Learned, I Learned In Kindergarten) said:

What Will Be Your Legacy Month