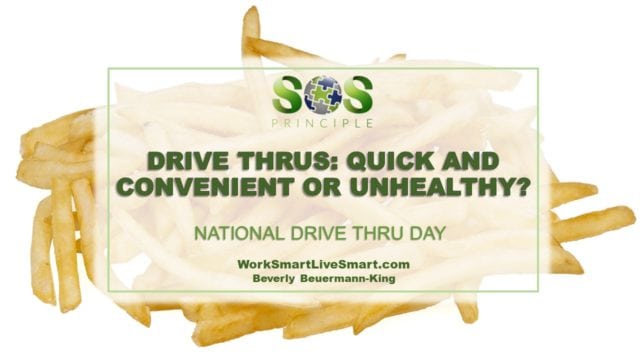 Did you know that going through the drive thru naked is illegal?

In 2012, Brian Coldin, a Bracebridge naturist, who was found guilty of “partial nudity that offended public order” for incidents that occurred in 2008 and 2009 as he went through a drive thru.

And apparently in some places, it may be difficult to get served while on horseback.  Phil Corman was initially refused his double double at a Lethbridge coffee drive thru while riding his horse.  Eventually he received an apology and his double double.

Today is National Drive Thru Day and while it is not recommended to go through the drive thru naked, or especially naked on a horse, we know that many of us will go through at least one drive thru today.

The first restaurant to have a drive thru was in 1947, called Red’s Giant Hamburg, which was in Springfield, Missouri. However, the first business establishment to have a drive through option was not a restaurant, but a bank. The City Center Bank in Syracuse, New York, opened a drive-thru in 1928 for the convenience of busy bank customers. Today, you can buy your milk at a drive thru, get married and even have a wake for a dead love one.  In California, you can stay in the comfort of your car to view the body of a friend or family member.

Health and National Drive Thru Day

Drive thrus can stir up a huge amount of emotion: anticipation, impatience, frustration.  Have you experienced drive thru rage?  A 54-year-old woman in Barrie, has been accused of purposefully reversing her car into another automobile at a Tim Hortons drive thru after the motorist behind her accused her of holding up the line.

Sometimes we see random acts of kindness in our drive thrus.  In one Tim Hortons in Winnipeg, one person decided to pay it forward and paid for the person’s order behind them.  228 orders later the chain stopped. Very Nice and Very Canadian.

Drive thrus can be quick and convenient, but they can also lead to some very unhealthy habits. How do you control your eating out habits?  Beverly Beuermann-King Click to tweet

According to one observer, “Eating out is no longer a special event, but a practical alternative to eating at home when no one feels like shopping or cooking.  Cooking ‘from scratch’ at home is generally reserved for special meals, not the every day. Most meals are now planned spontaneously. Decisions about ‘what’s for dinner?’ reflect a solution to an equation that involves three variables: 1) what’s on hand in the fridge, cupboard or freezer, 2) the time available to cook and eat and 3) the urgency of hunger.

Sitting down together at a table is becoming less and less common. Multi-tasking now extends to meals – eating, whether alone or with family, often is an accompaniment to another activity such as the computer or TV, texting, or reading, not an event unto itself.”

Some interesting thoughts around drive thrus?

Why are there parking spots for Drive-Thru Customers Only? If they are driving thru then they shouldn’t need to park.

When you order black coffee at a fast food restaurant why do they always ask you if you want cream and sugar with it?

Why do people nod their heads when answering yes or no at a drive-thru speaker?