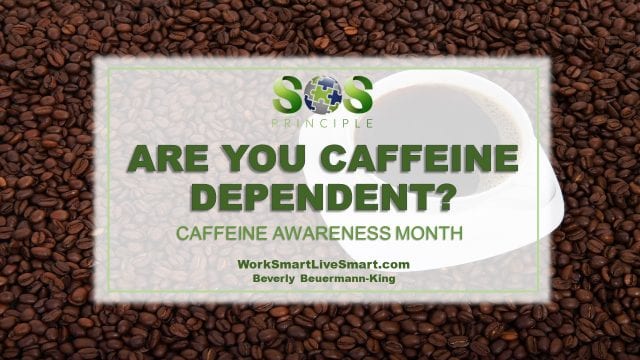 Caffeine Quiz: Ask Yourself This…

If you answered yes to any of these questions, you may be a caffeine addict according to the Caffeine Awareness Association.

The Caffeine Awareness Association, a non-profit organization, is committed to the physical, mental, and emotional wellness of the public whose lives have been affected by their misuse of, or dependency on caffeine. Their mission is to provide objective, evidence-based information and advice to help reduce the health, social, and economic harm associated with caffeine abuse and addiction.

National Caffeine Awareness Month is an annual event held in March that draws attention to the risk associated with caffeinism and caffeine withdrawal syndrome, a disorder recognized by the psychiatric community. At 200 mg of caffeine, you can experience irritability, restlessness, tension, insomnia, excitement, and gastrointestinal disturbance. If you consume more than 1 gram (1000 mg), you can receive irregular heartbeats, panic and anxiety disorders, muscle twitching, incoherent speech, excessive urination, flushed skin, and depression. And, believe it or not, when you ingest more than 5 grams, the results can be fatal.

Caffeine affects the ability of nerves in your brain to take in a chemical called adenosine, which causes sleepiness. Caffeine-drinkers are therefore less likely to sleep deeply than those who abstain. Beverly Beuermann-King Click to tweet

What Does Caffeine Do To Our Bodies?

When caffeine enters your body, your pupils dilate, your heart beats faster, your muscles tighten and your blood vessels in your extremities constrict. Caffeine consumption anytime during the day is very likely to disrupt your nighttime sleeping patterns. Caffeine affects the ability of nerves in your brain to take in a chemical called adenosine, which causes sleepiness. Caffeine-drinkers are therefore less likely to sleep deeply and well than those who abstain.

Caffeine has a half-life of about six-hours. That means that if your 4 o’clock cup of coffee contains 200 mg of caffeine, by 10 o’clock that night, there will still be 100 mg of caffeine in your body, preventing you from falling into a deep and restful sleep.

Did you know that Mountain Dew contains even more caffeine than Coca Cola? With more than 500 new energy drinks launched each year, caffeine has become the most widely used drug in the world.

In 2009, The Worst Caffeinated Product Award for 2009, went to a box of candy with the caffeine equivalent of 11 cans of Mountain Dew, 7.5 cans of Red Bulls or 6 cups of coffee. Crackheads 2 contains approximately 600 milligrams of caffeine. If the contents of the entire box were consumed all at once, it would pose a potential health risk, especially to the children it was marketed to.

Death Wish Coffee has recently become popular. It isn’t like regular coffee since it is made from robusta coffee beans and contains 200% more caffeine than standard arabica bean-based coffee. Again, this could pose a serious health risk to the average adult.

Additional Resources On This Topic: