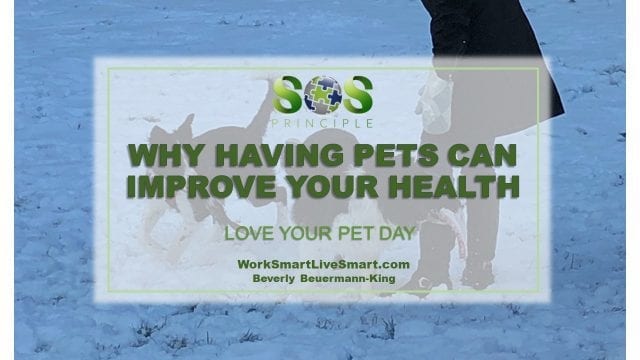 Their names are Carly and Misty. They are my source of stress at times as we train each other, and my cuddly companions when curling up on the couch at the end of the day.

Pets Can Improve Your Mood:

For those who love animals, it’s virtually impossible to stay in a bad mood when a furry warm head snuggles up to you, even if you are really ill.

Hypertensive New York stockbrokers who went out and got a dog or cat were found to have lower blood pressure and heart rates than those who didn’t go out and get a pet.

Research has also shown that heart attack victims who have pets live longer.

Even watching a tank full of tropical fish may lower blood pressure, at least temporarily.

Pets can be there for you in ways that people can’t. They can offer love and companionship, and can also enjoy comfortable silences, keep secrets and are excellent snugglers. They could be the best antidote to loneliness.

Research shows that nursing home residents reported less loneliness when visited by dogs than when they spent time with other people.

They connect to our nurturing side and help to pull us outside of ourselves and our thoughts. Pets learn to sense emotions from humans based on their affection levels and their actions. If the human is withdrawn the pet senses that something is wrong or different and attempts to change the human’s behavior maybe by nudging them or curling up to their body for heat when they are unsuccessful at producing a response.

While we all know the power of talking about your problems with a good friend but research shows that spending time with a pet may be even better!

People experienced less stress when their pets were with them when performing a stressful task than when a supportive friend or even their spouse was present! This may be partially due to the fact that pets don’t judge us; they just love us.

In another study people undergoing oral surgery spent a few minutes watching tropical fish in an aquarium. The relaxation level was measured by their blood pressure, muscle tension, and behavior. It was found that the subjects who watched the fish were much more relaxed than those who did not watch the fish prior to the surgery. People who watched the fish were as calm as another group that had been hypnotized before the surgery.

Pets Encourage You To Get Out And Exercise:

Whether we walk our dogs because they need it, or are more likely to enjoy a walk when we have companionship, owning a dog can increase our overall exercise.

It’s important to realize that owning a pet isn’t for everyone. Pets can make additional work and add to our responsibilities. However, for most people, the benefits of having a pet outweigh the drawbacks.

Beverly’s Hot Tips For Building Your Resiliency and Celebrating Love Your Pet Day: