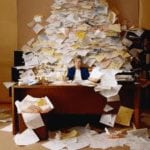 Job quality is associated with lower turnover and absenteeism and improved productivity performance. Health and well-being is impacted by the physical work environment, the physical demands of the job, as well as the psychosocial dimensions of the workplace, like job stress, role-conflict, and job control.

The Canadian Policy Research Network (CPRN) looked at health and wellbeing in Canadian workplaces in relationship to 16 other countries around the world. Their research examined two indicators of health and well-being. The first is a measure of how often workers reported working at high speed; a job that requires workers to continuously work at high speeds may contribute to stress. The second indicator shows the proportion of workers who feel that their health or safety is at risk because of their job.

Their findings:
• On average, about 11% of workers in the 17 countries studied report working at a very high speed all of the time. Workers in Canada have the highest ranking with respect to workers reporting working continuously at a high speed. The figures range from a low of 7.3% of workers in Spain to a high of 16.8% in Canada. (US at 16.5%, UK at 12.7%, France 10.7%).

JOB QUALITY:  The Impact of Environment on Health and Well-Being

Working in a ‘healthy’ environment is a vital aspect of what constitutes a good job. While being employed in a physically safe workplace is an important aspect of this, other factors also contribute to workplace health. These include supportive social relationships, reasonable workloads and latitude to decide how to get the job done.

Do you work in a healthy and safe environment?
Do you have trouble keeping up with workloads?
Does your job require you to work at high speeds?