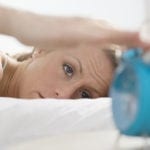 According to the Sleep in America poll by the National Sleep Foundation, 27% of Americans are losing sleep over their finances.

Research indicates people eat more poorly when they sleep less, that hormone changes occur, and some studies suggest those who sleep less weigh more. An increase in sleep drug sales also points to increasing struggles with insomnia. According to data from IMS Health, a health care information company, 56,287,000 prescriptions were dispensed last year for sleep medications, a 7% rise since 2007.

Beverly’s Comments Regarding Finances and Sleep
Not only can we help our employees address one of the main sources of their stress – their finances – but we also need to help them address the impact that this source of stress is having on their sleep. Many people are having difficulty getting a good night’s sleep. As employers we can assist our employees by providing them with solid strategies on how to get a good sleep by following bedtime routines, watching what and when they eat and exercise, learning to put issues in perspective, problem-solving what they can and relaxing their body and minds to promote a healthy sleep.

Do you stay awake at night thinking about the economy?
Are you generally a good sleeper?
Does your company offer sleep information/workshops?

Sleep Is The Answer