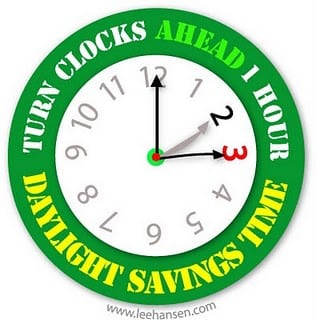 The opportunity to enjoy sunny summer evenings by moving our clocks an hour forward in the spring. Yet, the implementation of Daylight Saving Time has been fraught with controversy since Benjamin Franklin conceived of the idea. Even today, regions and countries routinely change their approaches to Daylight Saving Time.

Therefore it is important to take note of the impact that the clock shifting has on your sleep, mood and focus. Ensure that you are getting a good night’s sleep before this occurs to minimize the impact of this shift. Beverly Beuermann-King Click to tweet

Several studies in the U.S. and Great Britain have found that the DST daylight shift reduces net traffic accidents and fatalities by close to one percent. An increase in accidents in the dark mornings is more than offset by the evening decrease in accidents.

There may also be an economic benefit to DST, as daylight evening hours encourage people to go out and do more things. They may go to the movies, go shopping, or attend sporting events potentially spurring economic growth. In 1984, Fortune magazine estimated that a seven-week extension of DST would yield an additional $30 million for7-Eleven stores, and the National Golf Foundation estimated the extension would increase golf industry revenues $200 million to $300 million

Clock shifts disrupt sleep and reduce efficiency. Effects on circadian rhythms can be severe and last for weeks. A 2008 study found that although male suicide rates rise in the weeks after the spring transition, the relationship weakened greatly after adjusting for season. A 2008 Swedish study found that heart attacks were significantly more common the first three weekdays after the spring transition, and significantly less common the first weekday after the autumn transition. Therefore it is important to take note of the impact that the clock shifting has on your sleep, mood and focus. Ensure that you are getting a good night’s sleep before this occurs to minimize the impact of this shift.

Wellness And The Shiftworker

SAD – When You Fall Back Into Darkness Light Up Your Life