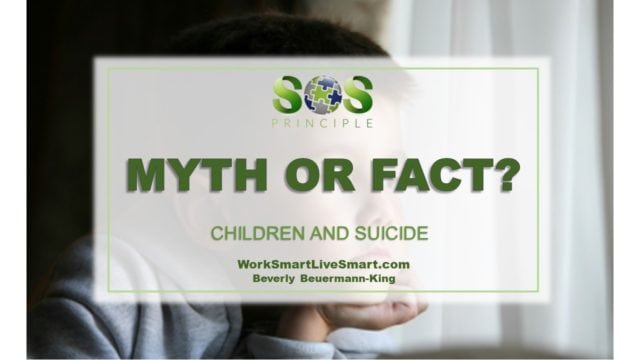 Myth – Children do not attempt or die by suicide

In fact, 3% of our children are suicidal at any given time and our rates are increasing among our youth. It’s important to understand children and suicide. It is the second leading cause of death among our children ages 15-19 and studies show that 1 in 7 students have seriously considered suicide.

Identifying those children at risk for suicide can be problematic in that communication skills may be limited, emotional development may lead to spur of the moment decision-making, and support networks limited.

Myth – A ‘good’ home prevents a child from committing suicide.

It may be difficult to understand the motives and causes behind the issue of suicide. Suicidal thoughts can affect anyone regardless of socio-economic status, race or sex. A history of mental illness including schizophrenia, depression and alcoholism may increase the risk for suicide.

Suicide does not run in families, however, the act of suicide by a family member can influence and increase the risk of suicide by 8 times for a child.  Beverly Beuermann-King Click to tweet

We do know that more than 50% of young people who had attempted suicide were recently involved in the break-up of a relationship. Most people, including children do not leave a note and if one is left it may only be to wish other’s well and not as an explanation of the thoughts and feelings the suicidal person was facing.

Other high risk indicators in children besides a history of mental illness, being a suicide survivor, and the recent break-up of a significant relationship may be those who are dealing with a major illness, those who are being physically, psychologically or sexually abused, those who have lost a parent and those who may be going through major life changes such as moving, attending a new school or learning difficulties.

Myth – There is no way to tell if a child is considering suicide.

About 80% of people give some sort of clue that they are considering suicide. Those clues may be verbal or behavioural. Behaviourally, children may give away their prize possessions, their art may become dark, they may lose interest in their hobbies, activities, school work and friends, they may become more reckless, and impulsive, they may experiment with self-mutilation, or you may notice changes in sleeping, eating and self-care practises. Verbally, children may communicate a sense of hopelessness around their situation, self-hate or self-esteem statements such as ‘everyone would be better off without me around’, or they may express more physical complaints.

Though most people give some sort of clue, it is important to remember that it is not a family member’s ‘fault’ if that clue is not recognized or given significance at that time. There is not a parent out there who is superhuman, totally tuned in and able to tell the future.

Beverly’s Tips to explore whether your child may be suicidal.

Giving support, providing information and alternatives, and finding the appropriate helping strategy is not easy but resources are available.

Communicating around the issue of suicide is very difficult. We are not accustomed to discussing these thoughts and feelings and even less practiced at saying “Are you thinking about killing yourself?” Questions and conversation need to focus on what issues that child is facing, letting them know that you are concerned about their safety, and determining a course of action that is appropriate at that time.

Parents must first determine the child’s risk for immediate suicide. This involves becoming aware of the behavioural and verbal clues and then communicating around the information that you have received. A parent needs to assess the child’s suicide plan – how specific is it, how lethal is it, how available is it. The more detailed and available the plan, the higher the risk for immediate suicide. At this point, emergency services may need to be contacted or put into place.

The right course of action could be calling 911, or it may be looking at the community or social services available to help the child problem solve the issues that they are facing such as a school counsellor, family therapist, doctor or psychiatrist. Understanding what the suicidal child is trying to communicate is basic to helping them find alternatives to suicide.

Unfortunately, ‘tunnel vision’ may prevent the child from seeing the support and alternatives offered to them.

As parents, we need to understand that we cannot tackle this issue alone. There are resources available to us. Children can access the Kids Help Phone or their local Distress Centre. Agencies such as the Canadian Mental Health Association can be a source of information linking you to local community resources. Your local library has a host of books dedicated to the issue of suicide prevention including understanding self-mutilation and the various mental illnesses. You family doctor can assist in making further community referrals.

Children do die by suicide even in the most supported situations. However, as caregivers and parents we can look for the clues and not be afraid to address the issue of suicide.