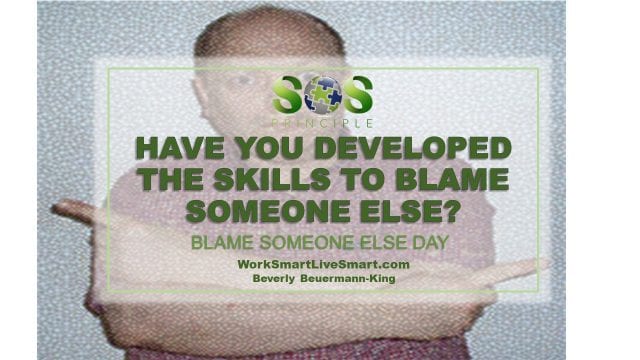 Interestingly, Blame Someone Else Day is celebrated on the first Friday 13th of the year—traditionally a day filled with bad luck.  It is also the day that we can lay the blame for all of our problems and mistakes on everyone else around us.  We could lay fault to everything on our parents, our brothers, our sisters, our teachers, our friends, our enemies, our boss, our co-workers, our neighbours, our government, our doctors, the police, the weatherman, the guy working at the grocery store, our computer, even our alarm clock….Not our fault…Not our responsibility.

Beverly’s Hot Tips For Celebrating Blame Someone Else Day:

Imagine how continually blaming others would decrease the stress that we feel and experience in our lives?

We know some people celebrate this day every day and it doesn’t seem to be helping them much.

More On Blaming Others

Blaming mistakes on others is socially contagious, according to several studies out of the University of Southern California. (See LiveScience.com) Just watching someone pawn their failures off on another can make you do the same to protect your self-image.

In organizations where blame is the norm, group members are likely to be less creative and perform poorly. Beverly Beuermann-King Click to tweet

It’s important for leaders, who are trying to shape their organizational cultures in a way to improve performance and creativity, don’t blame other people publicly. Leaders should take responsibility for their own mistakes in public in order to be a model of positive behavior. Some companies who know the pitfalls of a blaming culture, throw ‘failure parties’ in which people talk about their mistakes and learn from others in a positive and risk-free atmosphere.

And finally, if taking responsibility doesn’t turn out so well..just accuse…well whoever you can.

Top Ten Things People Do And Point At Others For:

Management Practices That Can Lead To A Toxic Workplace